I wanted you to know about this. 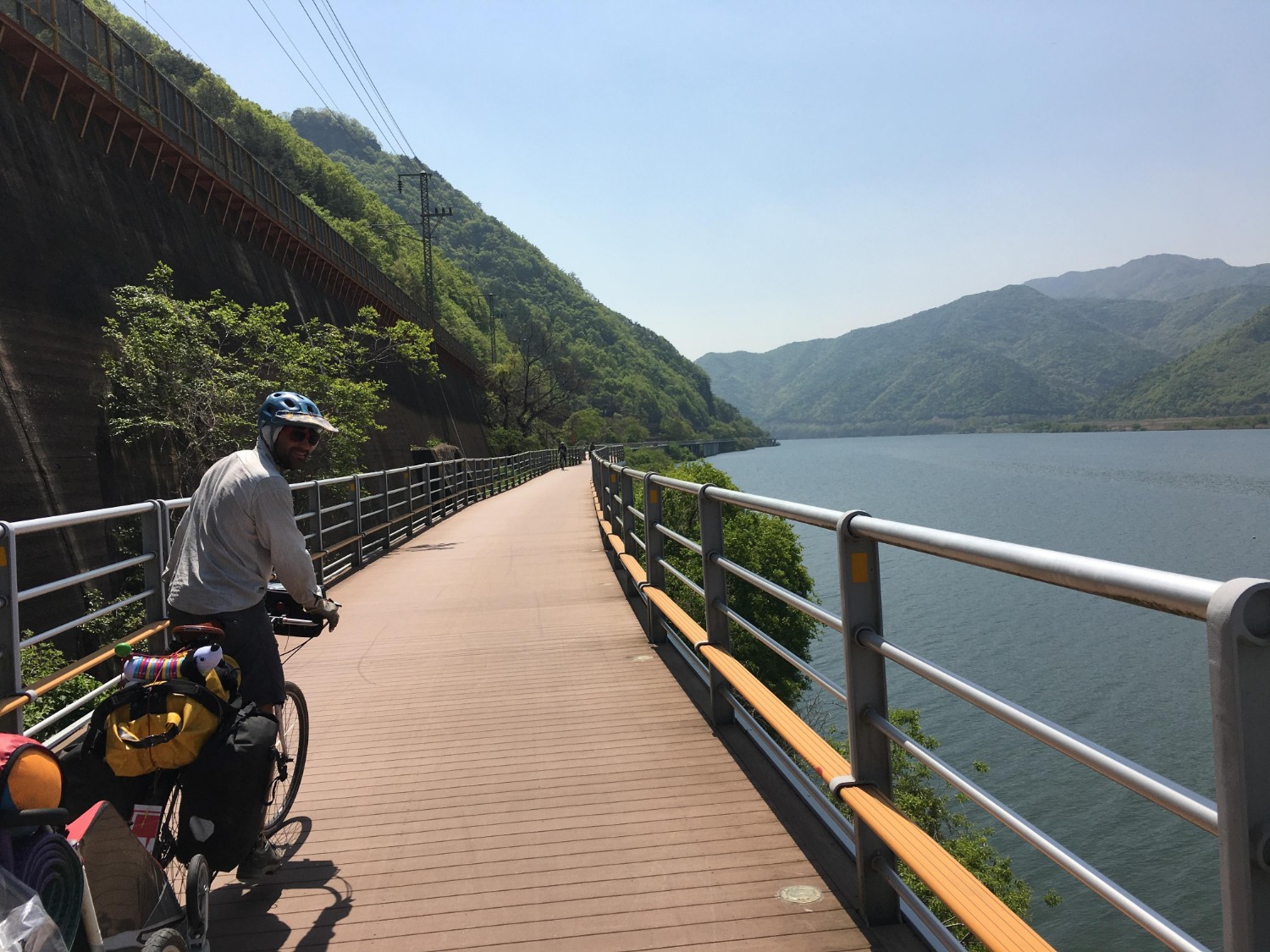 We had a delightful time riding from Seoul to Busan along the Four Rivers trail. We then took a ferry to Tsushima for another week of riding, which was delicious icing on the cake. If you want to go, here are some tips that might be useful.

Air pollution in Korea is not a joke. The locals say that it’s primarily a problem in the spring (and yes, they do blame it on China). Doing some web searching I couldn’t find compelling evidence that there’s a strong seasonality, but it’s worth some research. Looking retrospectively at the pollution levels for Seoul and Busan we happened to get lucky with the smog levels for our April 2019 trip. The Koreans, including cyclists, frequently wear masks, and you might consider doing the same.

We had perfect weather: a little cold at the beginning and a little hot at the end. It seemed like we had a predominant tailwind going North to South. We had two afternoons of rain, and that was all.

We found it very useful to have offline GPS maps with the route marked on the map. Although the route is very well signed, there are inevitably times when you’ve veered off course and need to find your way back. I was quite happy with the Guru Maps app available for iOS and Android. Here are a nice set of waypoints for the trip that you can upload into Guru Maps by exporting them as a KML file. Note that you will deviate somewhat from these waypoints, say by going on the other side of the river for a stretch, but it’s still a useful handrail.

The OpenStreetMap map available through the app was remarkably accurate.

We took our bikes on Asiana Airlines, which flew them as baggage without extra charges. The bikes were partially disassembled, and then packed into cardboard boxes we got from a bike shop. (Protip: get the biggest boxes you can, and don’t take off the rear wheel. This will save you from having to take off the derailleur, fenders, etc.) We also brought along a trailer for our daughter, which has accessory wheels that allows it to pass as a stroller. This allowed us to gate-check the trailer, which was handy in lots of ways. Although it’s possible to rent bikes and panniers in Seoul, we were happy to have our own kit.

Taking your bikes around the country on the long-distance buses was straightforward. They have large cargo bays going the width of the buses that fit all of our gear easily. I would even venture to say that they would fit a tandem, though I didn’t take measurements. However, tandems would be hard in general: we rode dozens of smallish elevators with our bikes getting in and out of the airport, as well as up and down overpasses.

We booked nights on either end of our trip at the Best Western Incheon Airport, which was willing to store our bike boxes for a month. They also have a regular shuttle to and from the airport that has cargo space big enough to take bikes in boxes. The back entrance to the hotel has a nice cement area for assembling bikes.

From the Best Western, you can bike back to the airport (along the maglev train line) in order to take the train into Seoul. The trip from the airport to Seoul is over water and not bikeable. We took the all-stop train to Cheonga International City station, from which you can ride back to the Ara West Lock start of the bike trail. You get on the bike trail behind the Cheonga International City station stop (don’t cross the parking lot). You can get your stamp book from the information center in that complex.

Seoul was one of our favorite parts of the trip. We booked two nights ahead of time in the modest Monai guest house which is close to the trail and a subway stop to get around the city. The owner Joseph was very kind and allowed us to store our bikes inside during our stay (warn him ahead of time that you’re bringing bikes). He has fantastic English.

You will find your own delights, but we wouldn’t have wanted to miss going to the Changdeokgung palace and its secret garden. I’d say that the zillion-dish vegan meal we had at Sanchon near the palace was one of the 5 most memorable meals of my life (though it wasn’t exactly a budget meal).

The riding is mostly on well-paved bike-only trails. It’s also mostly flat, except for when it’s not: there are two biggish climbs and 100 or so shorter inclines when you leave the river. Some of these are quite steep, with grades of 15% and more, so bring your low gears.

We mostly camped. We enjoyed the campgrounds when they were available, and when they weren’t we could always find a spot down by the river. Korean fishermen also set up tents by the river making this wild camping somewhat normal. Nobody hassled us for camping, but we did still try to stay out of sight in the reeds, just in case. Some campgrounds in Tsushima were closed because April was early in their camping season.

Although we loved eating in restaurants as much as we could, having a little cooking setup increased our flexibility. Propane canisters are easy to find in the larger grocery stores. They are called “gas-u” but taking your old one or having a picture of a canister will ease your canister shopping.

We were happy to have our gravity-feed water filter. We certainly wanted a water bag to be able to transport water, and having the filter allowed us to use some water that was marked as non-potable. We didn’t hesitate to drink tap water.

Because we were depending on our phones for navigation, I borrowed quite a chunky external battery for the trip so we wouldn’t run out of juice. That wasn’t really necessary, and a small one for a charge or two would have been sufficient. Restaurants all seemed to have outlets available and don’t seem to mind you charging, and all of the campgrounds had electricity as well.

Although just offline maps would have been fine if we had stuck to the main trail, cell data allowed us to be more spontaneous and recover from issues. Specifically, cell data will allow you to use Naver maps, the excellent Korean maps app, to see where the bike routes are, and to navigate places that you learn about en route. We would have gotten stuck a couple of times without having it, and having the web available to learn more about what we were seeing enriched our experience.

I used Google Fi, and the service was flawless even in the most remote locations of Korea. The service in Tsushima, Japan, was a little spottier (but this is simply a function of the cell network rather than the service). Even though I was liberal in my data use in Korea and Japan, my Fi bill was just $5 more than usual.

Spend a night in Hahoe

Staying a night in the UNESCO world heritage Hahoe village was a truly special experience. We stayed in centuries-old house that used a traditional wood-burning ondol floor heating system. Staying there will allow you an early morning walk in the quiet mist through Hahoe.

Although it’s not directly on the North-South main line, Hahoe is definitely worth a side-trip. It’s also an easy place to start or end your trip, as there is good bus service there.

Ride it with your family

We took our 7-month-old daughter along for the trip, which made it such a special family experience. She was our “ambassador,” and we had so many more interactions with locals because of her. Our friends rode with us to Hahoe with a 3 and a 5 year old in trailers and trail-a-bike, which was truly remarkable. We were comfortable with the safety level of the trip, given that it was predominantly on bike-only paths, but you will have to make your own choice.

Both Korea and Japan felt perfectly safe in every other way. For example, we parked our bikes outside a bustling market in Busan (the Korean equivalent of LA) with all of our stuff on them and came back an hour later with everything untouched. We brought a reasonably beefy cable lock, but would have been fine with a very light-weight one.

Tsushima was stunning. The island is a jungly forest, interrupted only by picturesque fishing villages in every cove. Here’s the view from Mount Eboshi Observatory:

The two home-stays we did here were very special. The dinners they served us had many interesting dishes, and the raw seafood was particularly notable. The Japanese use Google Maps, and you can find home-stays by looking for the bed icon.

There are lots of ferries from the International Ferry Terminal in Busan. Getting to the ferry terminal from the end of the bike trail is not easy. You can only take your bike on the subway during the weekends, and city buses do not take bikes. We rode our bikes there, which involved a lot of riding on bumpy sidewalks and a little bit on big roads. Naver was crucial for that leg. Getting back, we worked with the super-helpful folks at the tourist information office to arrange a taxi to the bus terminal.

Not all ferry services allow you to take bikes, but DAE-A Express Shipping Co do.

Japan is much more oriented towards cash versus card. We didn’t have luck with the ATMs at banks, but the post office ATMs worked great. Get some cash where you can.

There aren’t grocery stores everywhere in Tsushima, so stock up when you have the opportunity.